tabindex is a global attribute that allows an HTML element to receive focus. It needs a value of zero or a negative number in order to work in an accessible way.

Unfortunately, the tabindex attribute is often misunderstood and consequently misused. Following are some common examples of tabindex use that have a negative impact on accessibility:

Using tabindex with a value of 1, 2, 3, etc. places the element the tabindex is applied first in the keyboard tabbing order. This can create a confusing experience for anyone who relies on the keyboard’s Tab key to navigate. 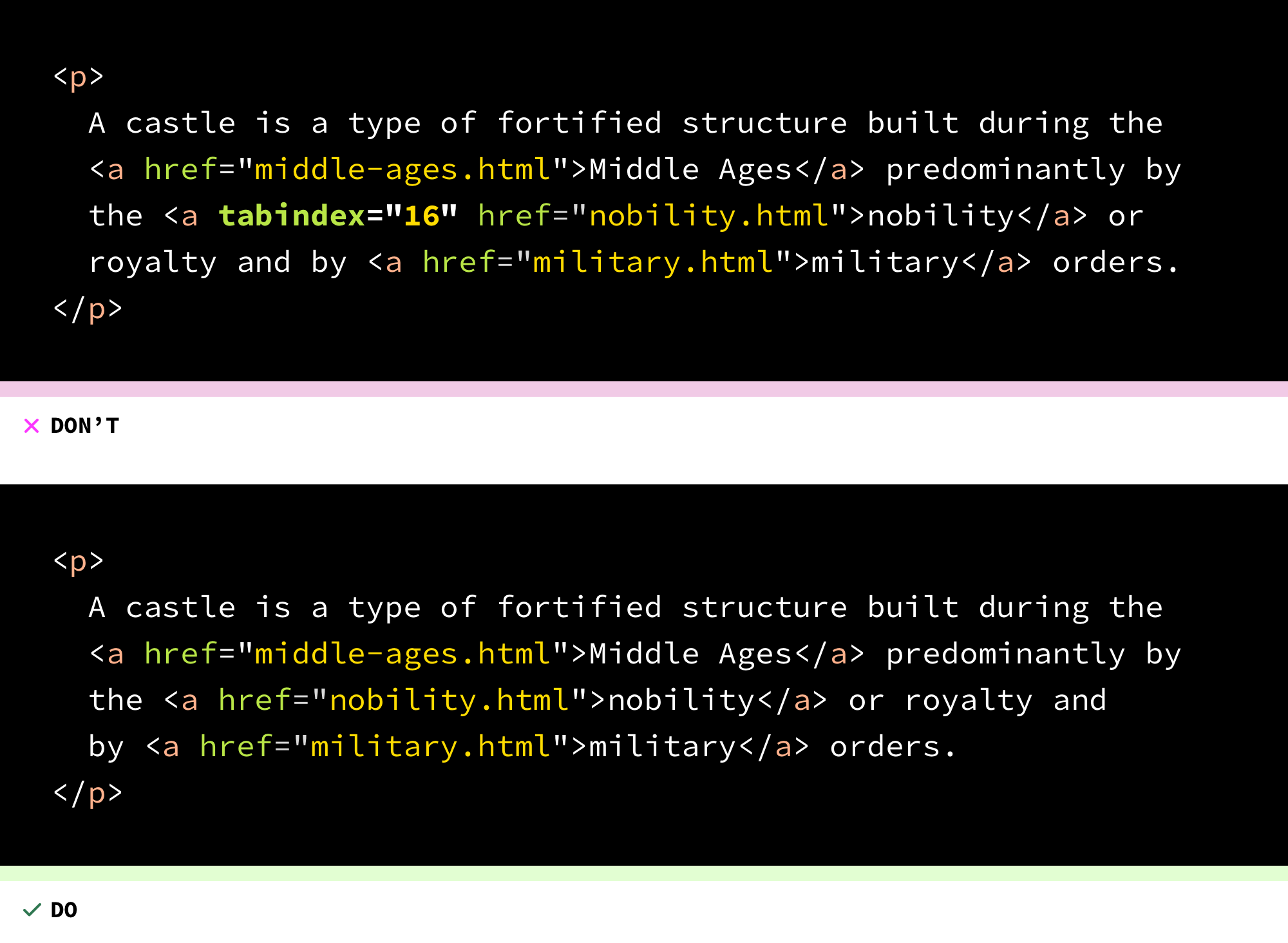 You don’t need to manually set tab order for every page or view on a website or web app. Not only is this extra, unnecessary work that is difficult to maintain, it may deviate from someone’s expected or desired way to navigate. This results an annoying, confusing, and potentially inaccessible experience. 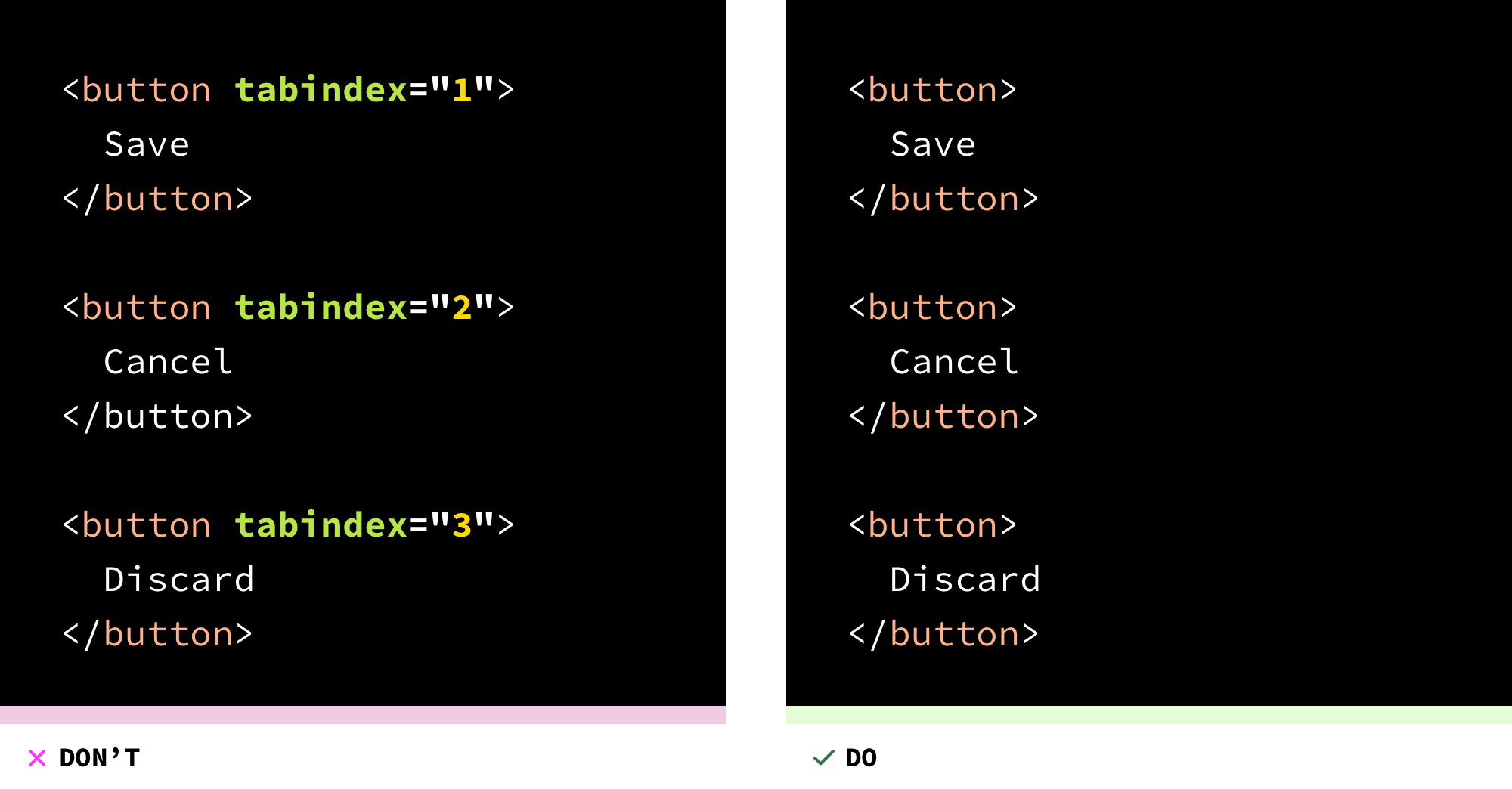 Instead, use appropriate interactive elements (a for links, button for buttons, etc.) and put them in the reading order of the document. Interactive elements come with native browser behavior already built in that allows them to be navigated to via Tab without the need for a tabindex declaration.

There is a myth that applying tabindex="0" to non-interactive elements (paragraphs, headings, lists, etc.) helps “improve” accessibility by providing a way for a person who uses a screen reader to focus on all the content present in a webpage or web app. Unfortunately, this well-intentioned idea actually does not create a good assistive technology experience.

The reason for this is that assistive technologies such as screen readers have other, expected ways of navigating through, and consuming this content. Because of this, adding a tabindex attribute to non-interactive elements creates a few problems. It:

You do not need to declare tabindex on a child element, provided its parent element is an interactive element. An example of this would be a span element nested inside of a button: 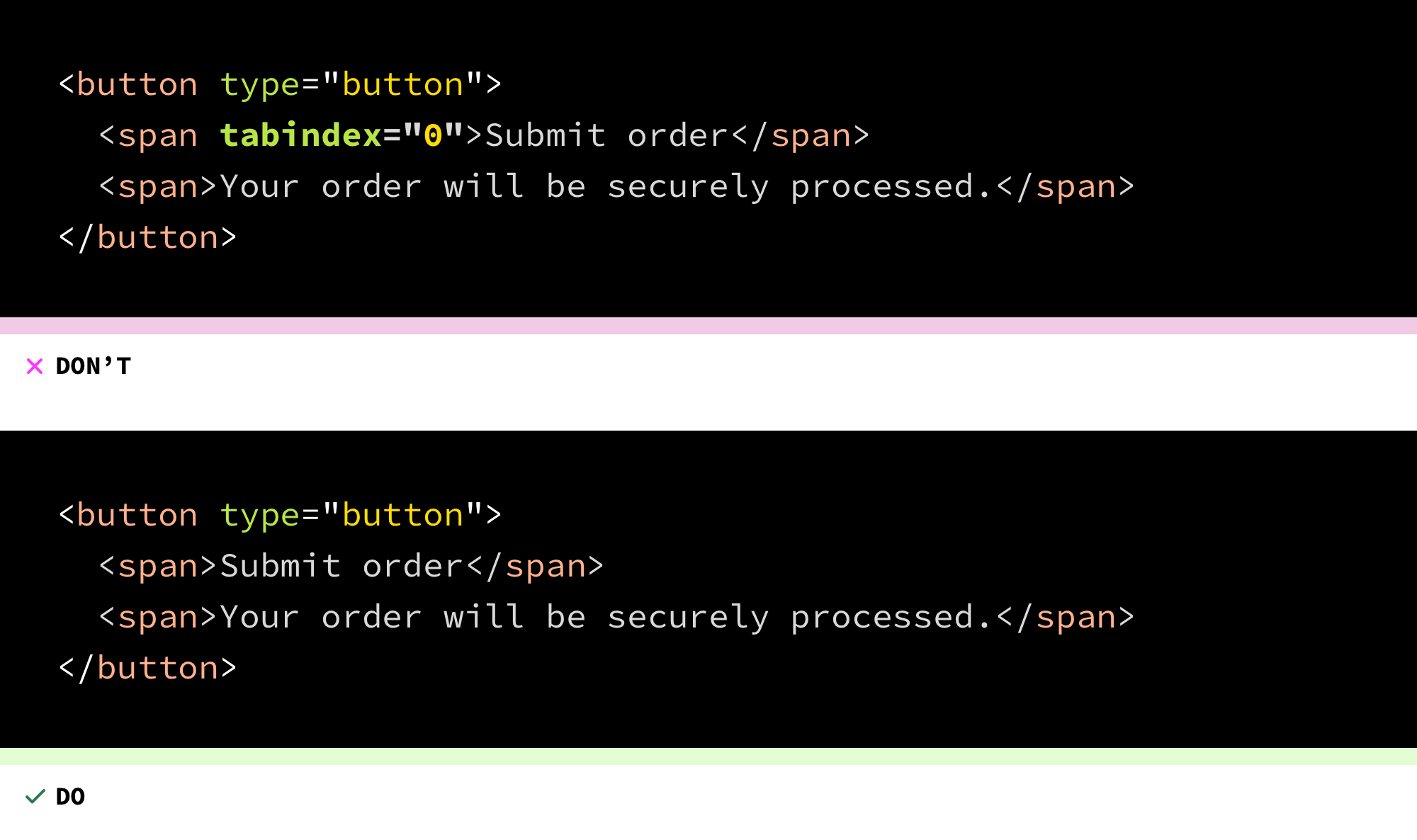 The presence of the tabindex attribute in this code example would affect the order of interactive elements in an illogical way. This creates an annoying and potentially confusing experience for people using keyboards or assistive technology.

Following are some of the more common cases where you do need to use tabindex. In these scenarios it enables the content to be accessible.

Declarations of tabindex="-1" can sometimes be found on interactive widgets and components that manage focus internally, such as comboboxes or trees, as it allows JavaScript to focus on the element via the focus() method. 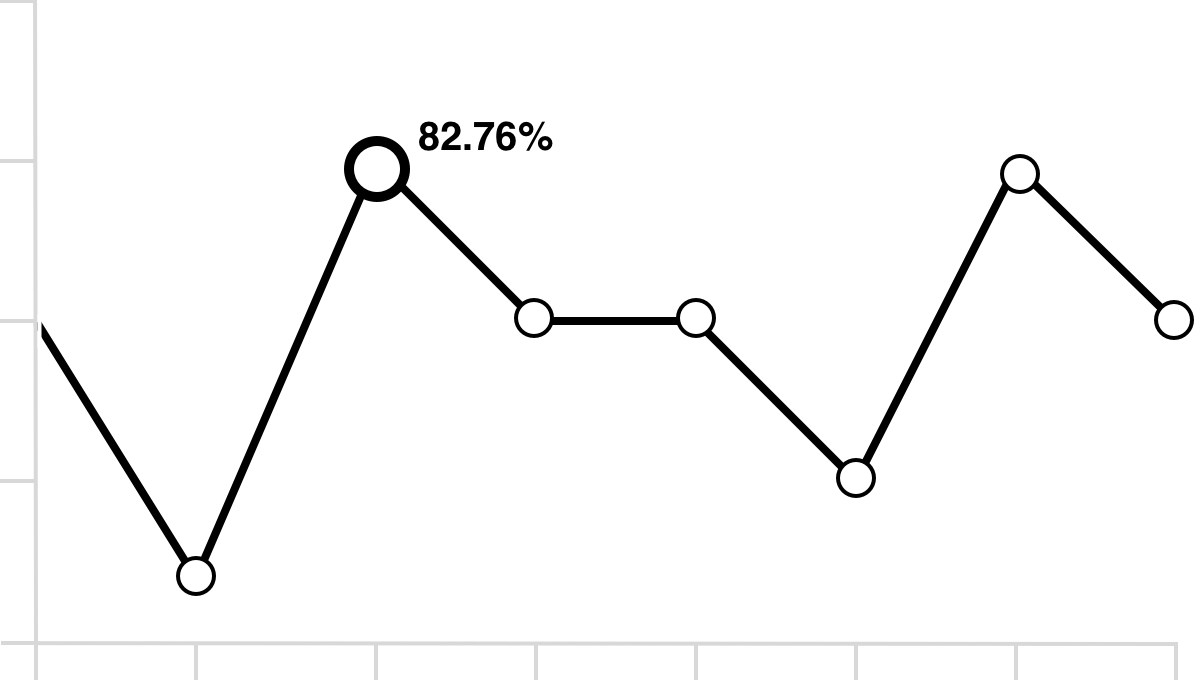 tabindex="0" should be applied to any non-interactive element that has had CSS’ overflow property applied to it. This will allow people using a keyboard to navigate to, and scroll around the overflowed content. 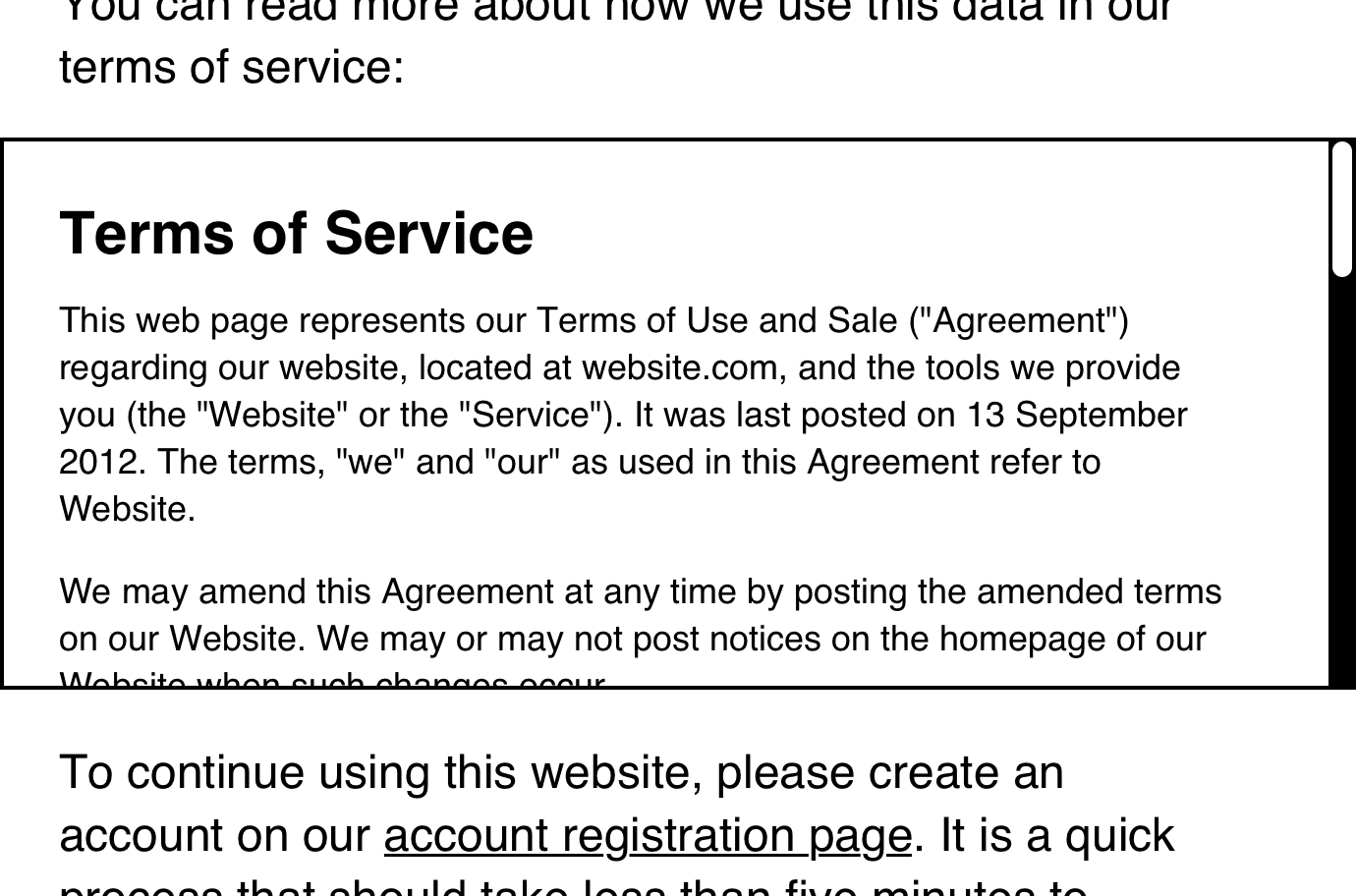 You will also need to provide:

This satisfies WCAG criterion 4.1.2: Name, Role, Value. It allows people to scroll using a keyboard, as well as providing an indication on why they should scroll, and what content they can expect to find within.

When there is not an applicable HTML element

Interactive controls that don’t have a relevant HTML element need a declaration of tabindex="0". An example of this would be a listbox, a widget that “presents a list of options and allows a user to select one or more of them.” 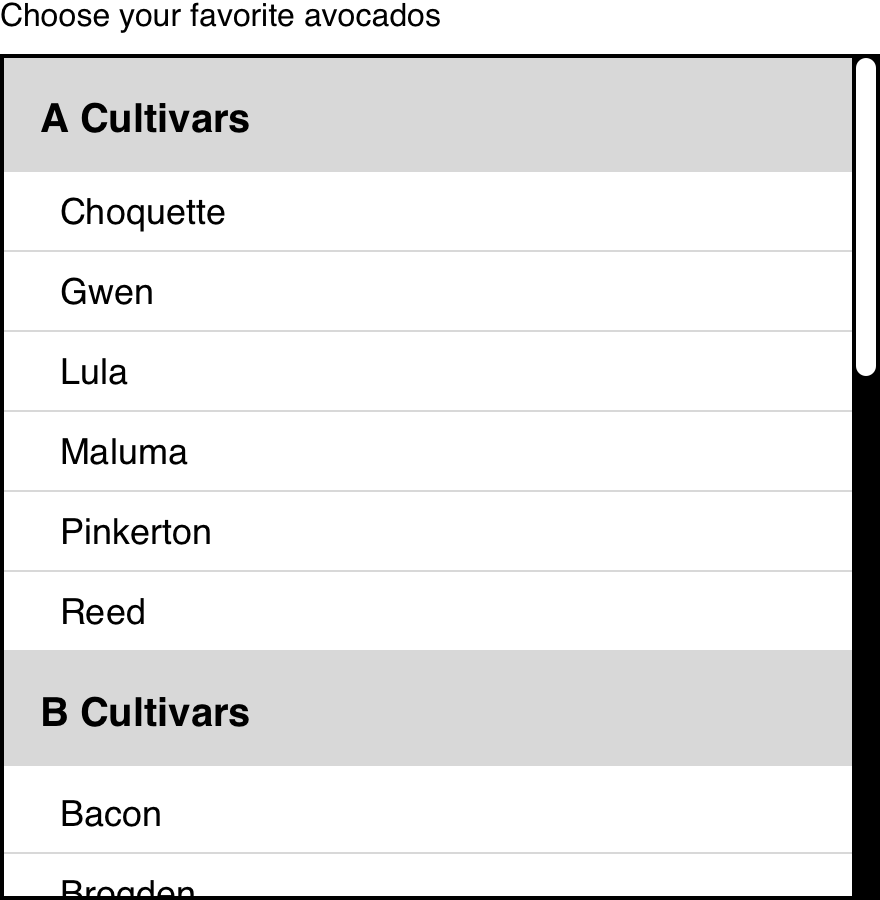 Hopefully this provides enough information to treat tabindex in a responsible, accessible way.

Thank you to Sarah Higley and Patrick Lauke for their feedback.